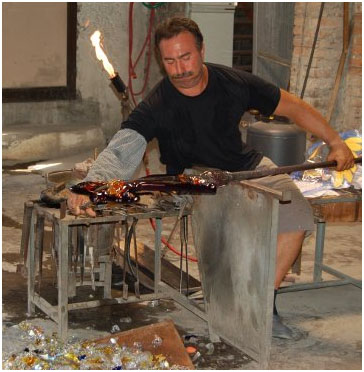 Oscar Zanetti was born in Murano, Italy in 1961. He comes from a long line of ancestors involved in glassmaking. In fact, one of his relatives was Abbott Zanetti, who was the founder of the Museo del Vetro (Museum of Glass) in Murano and also the one who began the Scuola del Vetro (Glass School) in the 1900’s.

Oscar began working at the age of fourteen while attending the Istituto d’Arte (Art School) in Venice. Like many masters he began as a “serventino” or assistant. He worked with several of the important glass firms in Murano, including Venini, La Murrina and Barovier & Toso, before joining the family business.

Oscar’s father Licio was a well-known glass artist who welcomed his son’s entry into his atelier. There Oscar perfected his techniques under his father’s guidance. When his father retired in 1990 Oscar was ready to take the helm as the master of Zanetti. Oscar inherited his father’s artistic flair while introducing new techniques into the glass production. He has become known for making large sculptures, many of which reflect the taste for Murano glass during the 1950’s. Oscar has also revived the use of “calcedonia.”

Oscar Zanetti has exhibited in many international shows as well as the important “Venezia Vetro Aperto.” He also works with several artists, helping them express themselves through the medium of glass. Now in his fifties, Oscar is still exploring the arena of glassmaking, pushing the boundaries with his mastery of this molten material.